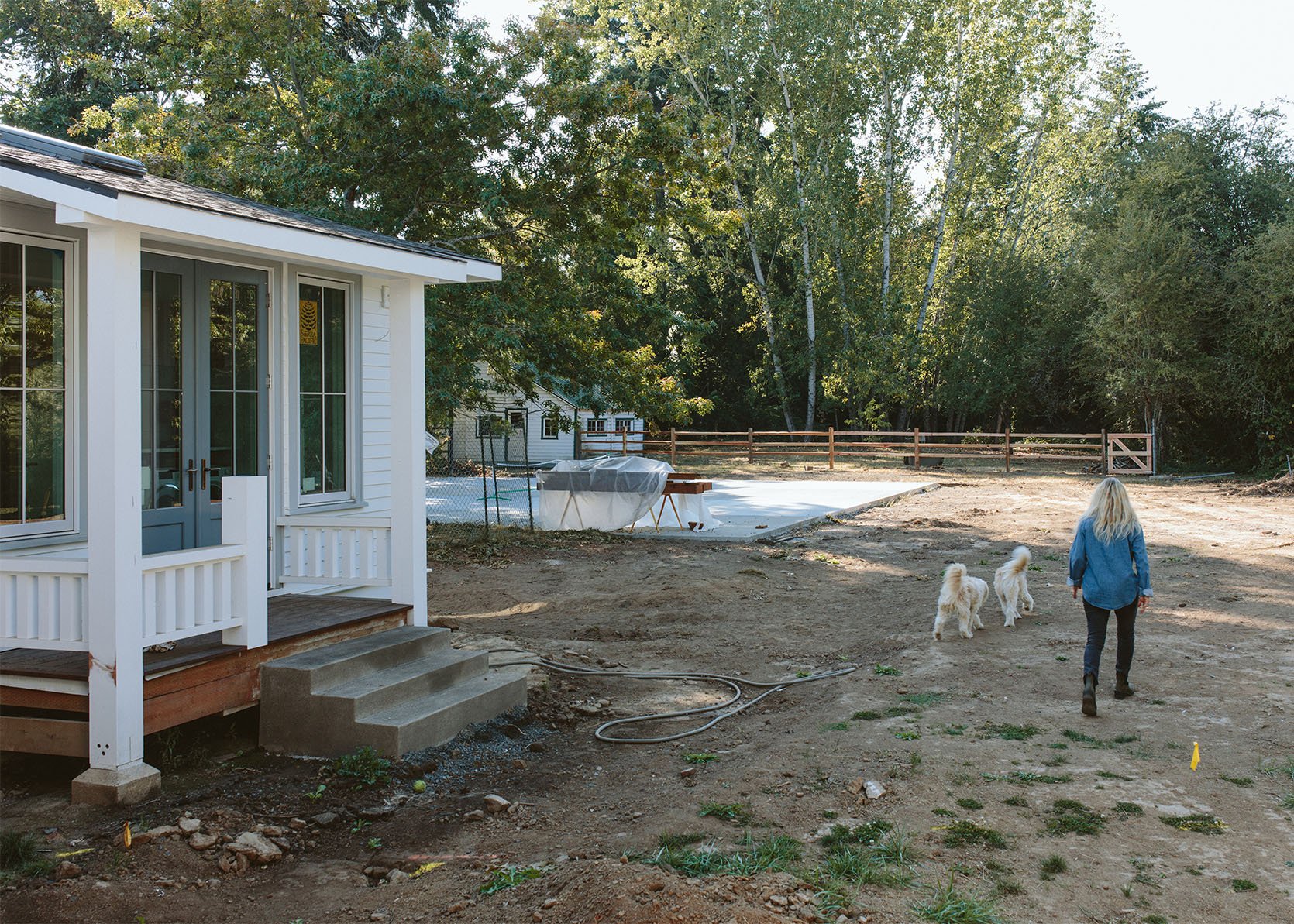 This landscaping project has been hard for me to get my mind around. We don’t have a final plan (will we ever?) and yet are moving quickly in some ways, very slowly in others which makes documenting a challenge. It’s exhilarating, intimidating, scary (financially), and yet we are full of hope and extremely grateful. We moved up here for the property. Having 2 1/2 acres of flat land close to a neighborhood and schools was a fantasy, and is why we finally moved back after wanting to for 10 years. We started brainstorming two years ago, thinking/hoping that we’d just landscape around the house and tackle the rest in phases. We’d add some chickens, goats, an alpaca or three, and a veggie garden then call it a day – and to some extent that hasn’t changed. But after 2 years of construction and no maintenance, it needed more than tweaking. It needed an overhaul. Oh, how I wish this was something we knew how to do ourselves or had the bandwidth to learn, but we don’t and instead are lucky enough to hire some experienced minds on both the design and the execution. As a reminder it’s almost 3 acres, and came with two houses (one I’ve barely shown you that needs everything and one we are living in), a massive sheep barn/carriage house that is falling down, a smaller barn that is so cute that I can’t wait to transform into something, a well house that we had to demo and now rebuild because we won the lottery and turns out it works(!), another well house that doesn’t work but acts as a cute shed, an enclosed paddock for future livestock, a sweet but not too healthy apple and pear orchard, and world’s longest cutest and most run down driveway. All of it is in the works to rehab, but honestly, it won’t be done for like 5 years and that’s okay (for the most part).

The Property When We Bought It

We hired Cali of Studio Campo pretty quickly after talking to her on the phone and Zoom. She was about to launch her own firm after working at larger landscape architecture firms for years and we just really loved her vibe and vision. She did the illustration above to help show us and you what we are working with.

This was the view to the back porch when we bought the house. The two big bushes blocked all the light to the living room and we knew we were going to open up the doors anyway so those were taken out.

Woah. It’s wild to see how far we’ve come! I think “Progress part 1” was about a year ago. ARCIFORM really did an incredible job designing and executing the back porch, sunroom, and extending that wing. Here’s where we are today!

WOW. We live here and have obviously stared at this in person for weeks but looking at this photo while writing this sentence is an odd feeling – it’s not a house I ever pictured I’d be able to own or live in. It’s definitely not the house we bought 2 years ago. It’s so beautiful and grown up and well, I’m not sure I even deserve to live here but man am I grateful. Big thanks to every single reader who ever read a sentence on this blog. And thank you ARCIFORM for all your hard work turning it into this!!! You can see we added the back porch, sunroom, added a window upstairs so it’s more symmetrical, and all new windows on the bottom floor (vintage ones on top and sunroom windows to tie both styles together).

The mini porch on the right is to the mudroom (and ideally where the kids/dogs will drop school bags/shoes once there is some hardscape to it). We painted the house Pure White SW 7005, with Online SW 7072 as the trim color around the windows. We still plan on adding shutters to the second floor (likely a medium tone blue – thinking Smoky Blue SW 7604 because we love it so much inside – also does anyone know a good shutter company?). Right now we have sewer issues holding up this area of the property – we can’t trench for electrical, plumbing, or irrigation to the other areas of the property until the sewer is fixed (it actually started yesterday). Then the porch steps will get finished and the landscaping back here will begin (maybe – I’ll fill you in soon). We have to shoot around the house in May so we are focusing on those areas for now – hoping to plant in the next month in time for a rainy few months and then BOOM spring 🙂

When we bought the property it had a massive sports court – like way bigger than a tennis court. But we LOVED the idea of it and like everyone else in the world, we are now into pickleball. It was in very bad shape (huge cracks with tons of weeds growing through them) and we went through every option possible to see how we could possibly keep it and just make it better. We had multiple resurfacers come to look at it and they all said they wouldn’t touch it because it would continue to crack. We thought about just keeping it for a few years, but knew that if we did eventually need to demo it out the machinery to do so would rip up any new landscaping we planted (which would be a lot). We also thought about just putting those sports court tiles on top, but opted not to do that for aesthetic and long-term reasons. We ultimately decided to pull the bandage off quickly and demo it out, to repour a smaller sports court that would be in better shape. We had multiple quotes ranging from $23 – $48k. We went with the $23k for obvious reasons.

Listen, if we were professional pickleball players we’d make sure it was poured perfectly but honestly we just wanted it to be better but didn’t need PERFECT. It was already such a sticker shock and not the way we had pictured spending our savings (from selling our house in LA). Plus the $23k guy was really lovely, nice, and ultimately did a good enough and fast job.

And it was a job. Like 6 layers of concrete because it had been poured over so many times. Our contractor said he could bring in a big rock-crushing machine and turn it all into gravel and then we spread it in our mud pit of a driveway to help with the mud/dust until we repour our driveway someday. So we were happy that it didn’t have to go far and that we could reuse it.

A Big Plot Of Dirt – With The Cutest Split Rail Fence

The “plan” for the rest of the project is still up in the air as we aren’t sure what is doable. I know that I want a pretty greenhouse (and we have leftover windows for it). I fell in love with the idea of a plunge pool from Soake Pools (hot tub in winter, very small pool in summer) but we are still figuring out if a crane can get it in here. My favorite thing we have done thus far is that split rail fence. We hired the most affordable fencing company (again, not where we want to spend our money). Brian was in charge of this because we both know that if I got involved in the design, I would likely make it complicated and expensive. We may never shoot the front and back entrances where the big privacy and vehicular gates are so I gave him full carte blanche to execute those (and they look great, although unfinished). But the fencing inside the property needed to be the right vibe, and I can’t TELL YOU how pleased we are with it. Sure, they put the gate in the wrong place (and we are adding another by the barn) but it’s a true split rail, made out of rustic wood, and it’s exactly what we had pictured. We will be adding more of that – possibly a shorter version around the greenhouse/garden area or around the sports court.

As you can see the sports court is still massive but has way less presence (in a good way). Brian is going to paint the pickleball lines (!!!) and I’m kinda staying out of it. I just love that we can go out there and hit the ball against the wall, ride bikes, rollerblade, etc. The kids already spend a lot of time out here which makes our desperate little confirmation bias hearts feel good about the decision to repour it.

More to come asap. Cali (Studio Campo) has been amazing and we have so many design plans and concept boards to show you. We also have an awesome expert landscape contractor that I’m going to tell you all about when we get further into the project as it’s a big operation and these people are very good.

It’s a lot and so many moving parts. It’s taken a decent mental jump to be ok investing so much into the exterior property. The reason we can do most of it is because of selling our house in LA and knowing that it’s a big part of my job (even those it’s not inside, landscaping projects are pretty popular which I get because it’s a lot) – both things I’m just so so grateful for. It’s going to be dirt for a while (but we got sod on the other side of the house!! Wahoo!!) with the hope that by summer we can enjoy it. Next week I’ll start showing you the overhead plans and all the mood boards that Cali came up with – paired with us changing our minds, changing the budget, changing our timeline – just not knowing exactly how we want to use the space. I’m happy she charged us by the hour because the amount of back and forth, editing, and rethinking she had to do with us was a lot. I can’t wait to show you what she came up with. xx

*The Pretty Photos by Kaitlin Green🙂

The post A Farmhouse Exterior Update – The Current State Of The House, Sports Court, And What Is Next appeared first on Emily Henderson.

Thu Oct 20 , 2022
I often get the best quotes directly from my followers! This one was from Instagram. That said, there are definitely moments when timeless finishes are also trending. But in general, as you know from following me, it’s important to tread with caution when you are sourcing items that cannot just […]