Panoramic Wall Murals are one of my favorite decorating elements. The funny thing is– I’ve never done one, for a client, and here’s why.

In the early days of my career, and until maybe six years ago at the most, the only way you could get one of those beauties was to fork out a tremendous sum of money. Few of my clients had that kind of budget. And, of the ones that did, it never came up.

What is the difference between a panoramic wall mural and a Chinoiserie wall mural like we discussed last week?

A panoramic wall mural is just what it says; it’s a panorama. An expansive view of a land or seascape. Now, a Chinoiserie wall mural could also be a panorama. However, typically, Chinoiserie murals are more decorative trailing flowers and leaves, and sometimes some birds, and the like.

Some of the places are quite exotic, and can be with or without people and animals. Often, these murals illustrate historical events.

However, panoramic wall murals can also depict jungle gardens, rivers, lakes, and mountains. Some panoramic murals tell a story, and some are purely decorative.

As with Chinoiserie murals, there are two types:

Then, about three years ago or so, I began to see new sources for printed and hand-painted murals on Etsy. At that time, there were either no reviews, or the few they had were all five-star reviews. Since then, things have changed.

There are many reviews. And, while most are terrific, there are often some with legitimate complaints. I’m not talking about getting the wallpaper two weeks late. I’m talking about issues with the print, colors vastly different from the sample, shop owners refusing to communicate.

I even read one woman say the owner was going to give her a refund until the owner saw the buyer’s poor review, and then rescinded the offer. The buyer then wrote that she wondered how many others had been strong-armed into giving five-stars, in order to get a refund.

Therefore, here is my conclusion about purchasing wallpaper of any kind on Etsy. Some of this is redundant from the Chinoiserie post.

One shop, the owner jumps on if she gets a negative review and accuses the buyer of being dishonest.

I say, always be gracious, even if your customer is being a pimple. And, also, just suck it up and give them their money back. I always called it the 5% rule. I made that up. But, I always figured that every year, 5% of my profit went towards making things right for my client. It’s the cost of doing business.

I did write a similar post two summers ago about panoramic wall murals. (You won’t find it now), and unfortunately all but one or two sources on Etsy have bitten the dust. While they might be producing excellent results for some customers, the inconsistency is bothersome.

So, does that mean to avoid Etsy for panoramic wall murals and other wallpaper?

No, just please do your research and be very specific on what you want, and always get everything in writing. Have the seller sign off on your purchase order, as well. If they won’t do that, I would move on. There are zillions of fantastic sources, and I’m about to go into some that are relatively obscure.

As for Etsy, there are a few new sources for gorgeous panoramic wall murals. All have superb reviews.  But, since this is such a vast subject and there are so many sources, I need to break this up. So, what I’m going to do is focus on my four French beauties for exquisite printed panoramic murals.

I believe that all of them can be purchased online. And, they are not hideously expensive. An average mural is about $1,200.00, some a little more and some are less. In addition, the quality from  all of these companies is superb, or (superbe en francais).

One thing you might notice is that all of these sophisticated wall paper brands appear to be copying each other.

Well, they might be. However, there are some designs, historical documents, actually, that are so old, there’s no copyright on them. They are open-source. Many of these classic panoramic wall murals are from open sources from the 19th century.

One of the most famous of these free-to-use designs is know as Eden, or en francais, L’Eden.

Most of the top panoramic wall mural sources have a version of Eden or Brazil is another one.

You will see both of them shortly.

The original wall murals were usually block prints. Now, that would be an interesting post! But, essentially block printed paper is exactly as it sounds like. That is why you will find a far less painterly wall mural than one that is hand-painted with a brush. Of course, those existed and still do today.

I put these four wonderful companies in alphabetical order.

This company I first featured on the blog maybe eight years ago. They have some of the usual, but also many exotic and exclusive designs, all beautifully rendered and styled. Holy crap! Can I live here? I find these murals transformative and incredibly romantic. 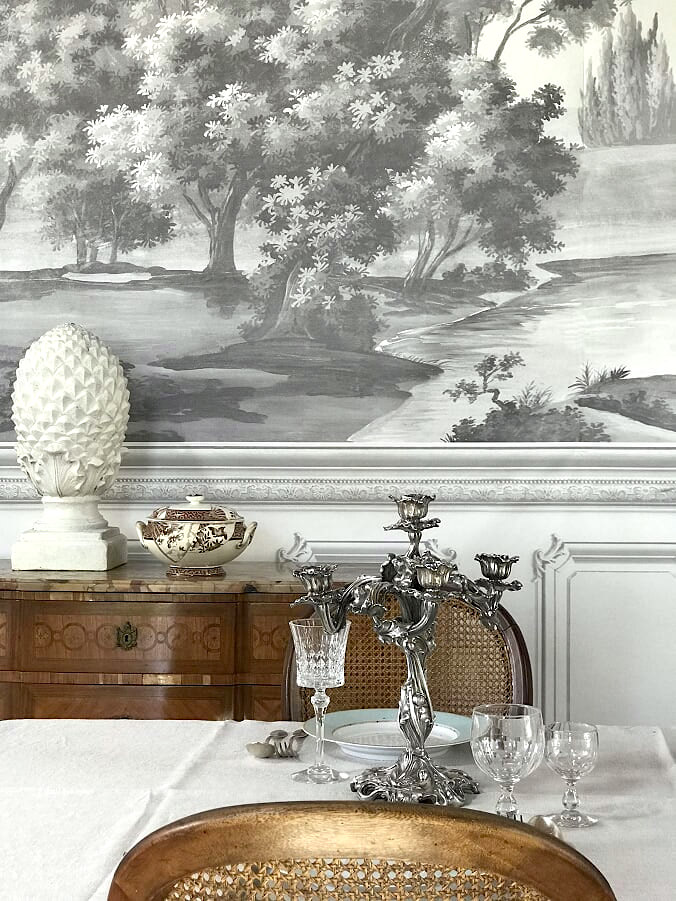 Ananbô has some gorgeous grisaille wall murals, as well.

Maybe some of you remember these two posts where we looked at some expensive fantastic panoramic wallpaper murals in Grisaille. 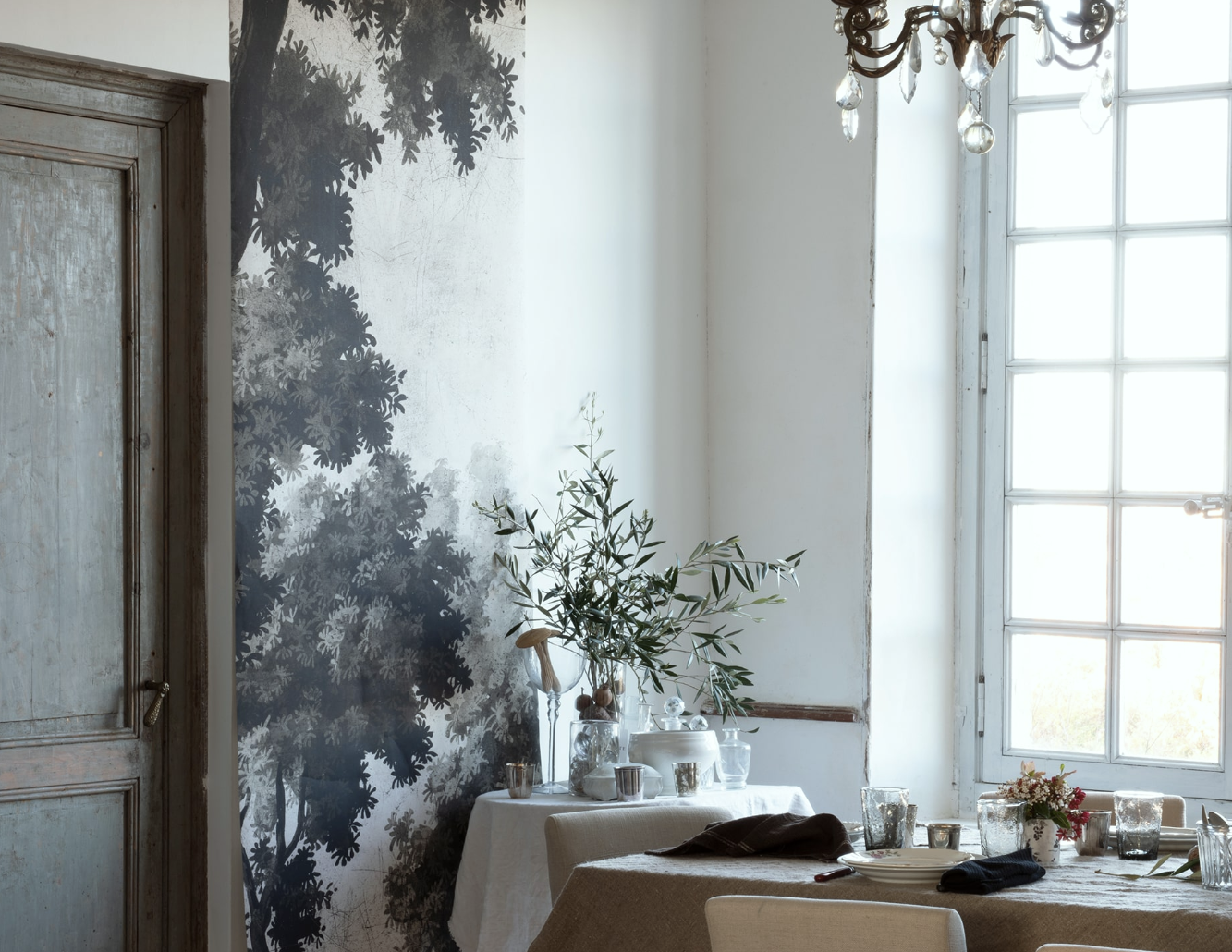 Grisaille, if you don’t already know, are tone-on-tone designs rendered in gray or sepia. Sometimes, some color is added to parts of the image.

I’m just sneaking in this next image of a DeGournay wall mural because it’s handy. 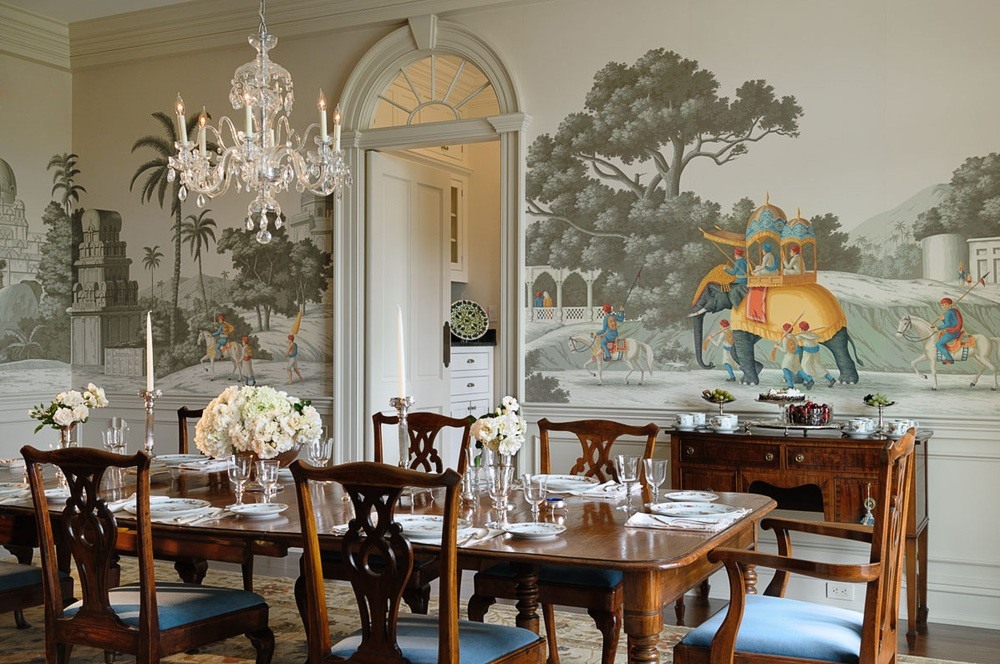 This is an excellent example of a grisaille panoramic wall mural with color added to some parts.

This is another beautiful french wallpaper mural company with a vast and beautiful collection of panoramic wall murals.

(Please forgive me, but things have gone horribly wrong and this company is out of order alphabetically. However, I only realized this just before publishing and I don’t have the strength to move everything around.) 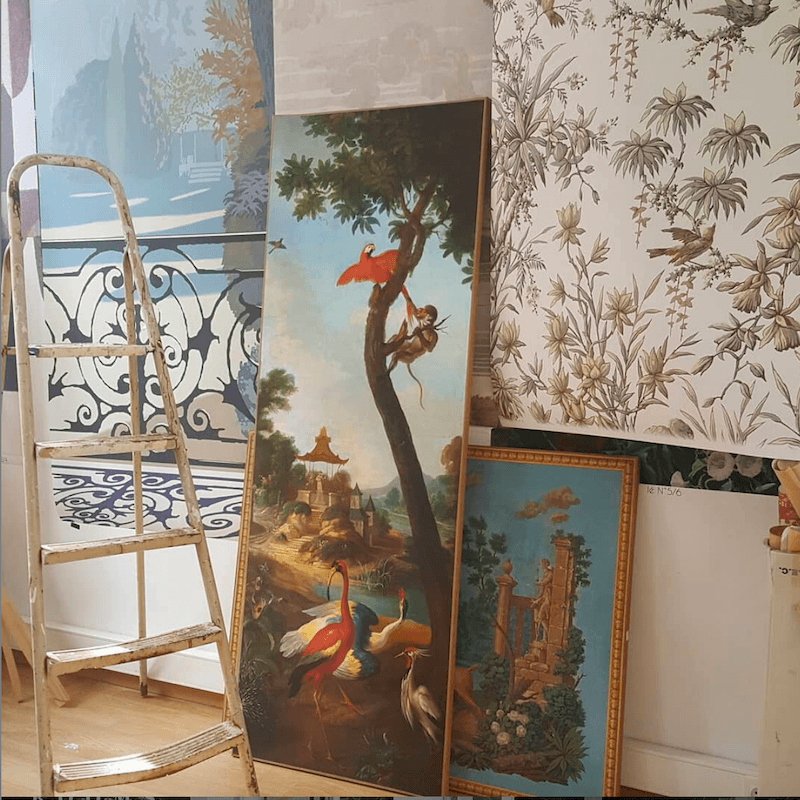 If that piece of art in the back between the windows looks familiar, it’s because it is. :] (Please scroll up, to see what I mean.) I believe all of these companies have Brazil or Bresil as I’ve seen it spelled, in their inventory of magnificent panoramic wall murals. Just in case some of you aren’t up on all of the popular vernacular, “sick” in this case means out of this world, fantastic! But, how many times can I say “wonderful,” “exquisite,” “magnificent,” “beautiful?”

And to prove how “amazing” I think this room is, I spent nearly an hour searching for hi-res versions of these beauties. I found them in Russian Vogue. This source, I discovered by accident– today! But, it’s a new favorite. All of the murals below are from historical panoramic wall paper. Joseph Dufour designed many of them in the late 18th and early 19th century.

I’ve also seen most if not all these historical designs in hand-painted versions at DeGournay and Zuber. I wonder if they will join the crowd and create their own versions of these beautifully printed historical wallpapers. Or maybe, they’ll just stick with what they’re doing. (sorry, I forgot to turn on the English) 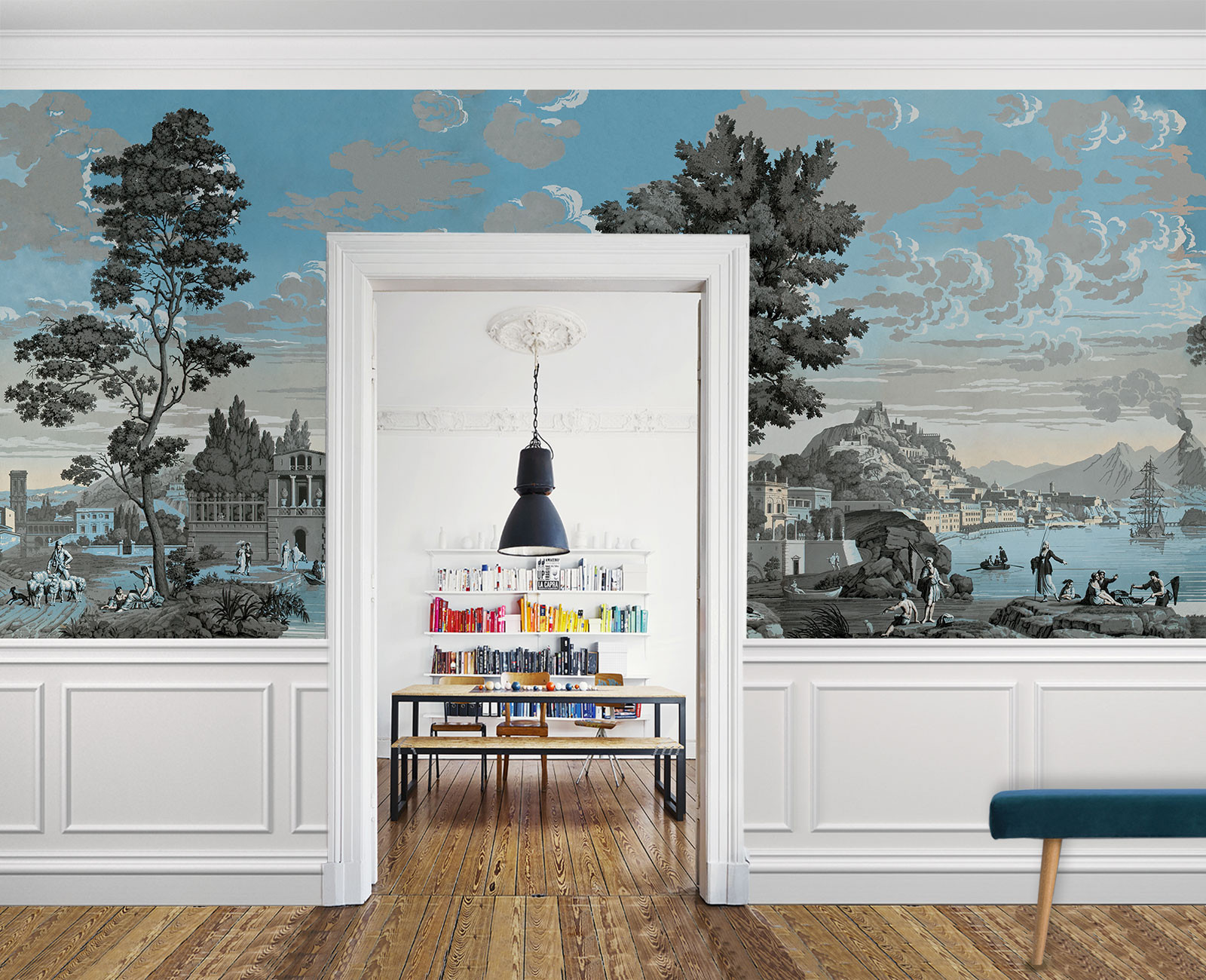 Edited in 1823, this panoramic wallpaper was made by Dufour & Leroy and based on the artwork of Joseph Vernet. Pretty cool, huh? You can purchase five of the panels below, at Etoffe and also read a little more about the mural and its origins. Also, if you want more than the five they carry online, I believe you can contact them and they can get you whatever you want. The portion they have is five panels (please see directly above) and the price is just over $1,000.

You also might be able to purchase other parts of the mural directly from Le Grand Siecle. Here’s the link for this mural. 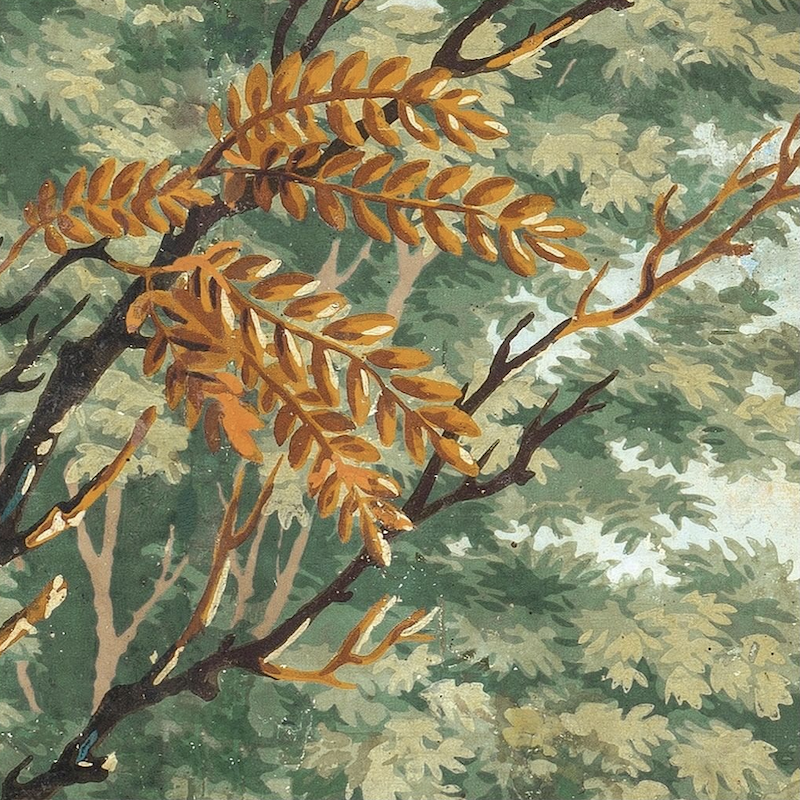 Etoffe is a French brand representing numerous vendors, and Le Grand Siecle is one of them. It’s a gorgeous website. Anyway, they will ship orders over $500.00 for free!

One question you might have would be if you can use the individual sections of these murals as separate panels.

In some cases, yes, absolutely. However, sometimes, I think you’ll need two of the panels and maybe trim them according to the size you need and what looks good to your eye. That’s something I’ve considered doing, if I do those two large art pieces flanking my fireplace.

Well, that’s it for now. I hope you enjoyed this installment of panoramic wall murals!

please feel free to share! *Love your comments! Please note however, that the blog is meant as general advice. In addition, it is not possible to give out specific answers to your interior design and/or paint questions. Thank you for your understanding.